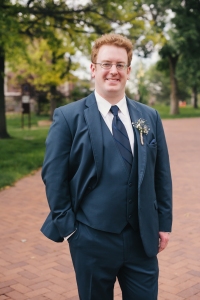 Tim is currently pursuing a Master of Music in Film Scoring degree from Berklee Online, where in addition to refining his technique for composing music to picture, he has also been honing his ability to combine all of the styles of music that he is passionate about in his compositions. He had the opportunity to score a student film directed by Suraj Savkoor, and compose multiple works using orchestral forces that were recorded by Budapest Scoring in Hungary.

As a way of researching and practicing film score orchestration, Tim composed a theme for the Movie Mumble podcast, hosted by Nerds That Geek (he is also one of the voices you will hear), and for over a year he arranged and orchestrated that theme to fit the style of whichever movie they watched and discussed each month. He also composed a theme for the Nerds That Geek website, as well as their main podcast, Nerds That Speak. He can also be heard as one of the voices on the Motor Mouth podcast.

While Tim was working towards his Master of  Music in Composition at the University of Denver, he studied and composed in a contemporary classical style for solo, chamber ensembles, orchestra, and even the electronic medium. He extensively studied the music of Krzysztof Penderecki, who became one of his favorite composers. He also participated in the Lamont School of Music’s North Indian Classical Ensemble and Senegalese Drumming Ensemble, where he received extensive experience in the instruments and compositional styles of those regions.

Before moving to Denver, Tim did a variety of composing, teaching, arranging, and performing in Rhode Island. He had his first film collaborations with Eric Altieri and Richard Brownell, and was commissioned to compose music for the concert stage by the  the Ocean State Chamber Orchestra, the Ocean State Youth Orchestra, the Ocean State Music Collaborative, the URI Concert Band, and the Woonsocket High School Concert Band. While he was the Drumline Instructor for the URI Ram Marching Band, he arranged classical and film music (Star Wars, Spider-Man, Superman, The Matrix, The Planets, The Rite of Spring, Barber’s Adagio) for the band to perform during their halftime shows. During this time, his interest in the music from other parts of the world led him to study World Music and Sacred Sound, and as a result, his compositions began to include unique instruments and textures, and took on a meditative quality. As a percussionist, he performed with the Thayer Symphony Orchestra, Atlantic Wind Symphony, Southeastern Massachusetts Wind Symphony, The American Band, Milford Concert Band, Symphony Pro Musica, Rhode Island Philharmonic Community Orchestra, Brown Wind Ensemble and Percussion Ensemble, and Wheaton College Wind Ensemble. He also played drum set for musicals at the Prout School, Johnson and Wales University, and Franklin High School.

While attending the University of Rhode Island for his Bachelor of Music in Composition, Tim divided his time between his composition studies, and practicing classical percussion. This is when he discovered George Crumb, who quickly became his favorite composer. While studying Crumb’s beautifully hand-written scores along with their recordings, Tim developed a love for the sounds produced by extended instrumental and vocal techniques, which have become an aspect of his own compositional voice. He also spent an extensive amount of time learning solo marimba repertoire, and performing with the University of Rhode Island Percussion Ensemble, both of which also heavily influenced his compositional style.

Tim’s musical influences began early on, when he was playing in his school concert bands and marching bands in Rhode Island. His experiences of being part of large ensembles has definitely influenced his understanding for how to compose for large forces. Playing in concert bands is also what let him to be aware of Gustav Holst who became Tim’s first favorite composer. Tim also grew up listening to classic rock, and as his tastes matured and became more his own, they expanded to 90’s grunge and progressive rock. In high school he began playing drum set in rock bands, and as his need for creative expression grew, he also taught himself how to play guitar so that he could start writing his own songs. To expand his musical vocabulary, he took a music theory class, and after hearing the performance of the percussion ensemble piece that he wrote for his final project, Tim realized that he was a composer.

One thought on “About Tim”